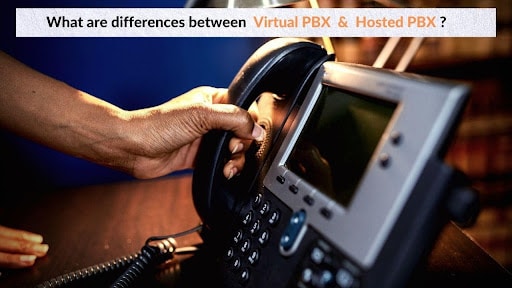 Virtual and hosted PBX are not the same thing. We explore the differences and highlight the pros and cons below.

Many people think that a virtual and a hosted PBX (that’s Private Branch Exchange) are very similar things. We are here to tell you that while they may do the same job, there are distinctive differences in capacity, flexibility, and costs attached.

Virtual PBX and Hosted PBX are very different things, but they both offer solutions in their own way. Let’s have a rundown of the facts and review the situation.

What is Virtual PBX?

In the old days of receiving calls to your business, you would have had to rent the line, provide the equipment, and pay the staff member to receive the call and direct it as was necessary.

The modern version of this has been updated to incorporate advantages we have learned about in the modern world. So, a Virtual PBX is an automated answering service and call director.

There are several benefits to this. For example, a virtual PBX is faster, easier to monitor, and less costly than a traditional phone line, so it makes a natural upgrade from the old ways of call handling.

What is a Hosted PBX?

A hosted PBX does the same thing to achieve a similar result. It lets you receive your calls without all the additional equipment, but it encapsulates Virtual PBX as a sum of its parts. What does this mean? It means that while the Virtual PBX is the call answering and directing service for a business, the Hosted PBX system represents the entirety of a PBX telephone system.

Essentially, Virtual PBX is a part of Hosted PBX. However, there are further differences.

There are a number of areas where these two systems differ. One is in the initial call reception. A Virtual PBX will be able to sort and send the inbound calls off to their relevant departments. It will automatically reroute calls where possible, sending them to your employees. For example, a virtual PBX could reroute office calls to your cell through the evening.

The benefits of the Virtual is that it is cheaper than the whole hosted system, that it allows users to your business to be able to reach you no matter where you are, and that it saves you missing calls.

But it’s not just size that sets them apart. Here are some other key differences between the two:

Where can I find PBX services that operate through the Cloud?

There are several ways you can get either service from a certified and registered online provider. Even small businesses can sound big with powerful but affordable solutions from https://www.kall8.com/VirtualPBX.

How To Inspire Creative Breakthroughs via Online Collaborations

Here Are The 10 Most Common Animation Mistakes You Should Avoid

How Do Barcodes Work? The Basics Explained

How to create a mobile app without coding skills?

How to develop a Hospital Management System?