The offline T-Rex dinosaur in Google Chrome turns itself into an addictive game when you press the spacebar. It works on mobile version and desktop version too.Google Chrome users are probably familiar with the T-Rex dinosaur that shows up when your computer is not connected to the Internet.

How to Play The Endless T-Rex Runner Game in Chrome

1) Firstly, turn OFF your Wi-Fi connection and internet connection. Then, open a new tab and load up www.HowToCrazy.Com. You’ll see the standard Network Error page.

2) The lonely T-Rex at the top of the page will suddenly bounce. A stretch of land will appear before him. And then, he will start running.

3) Like other endless runner games the goal is simple: run as far as you can, for as long as you can, until you crash.

Tip- Every 100 points marker is punctuated by a screeching high score blip.

Its all about how to play the offline game in google chrome. You can play it anytime, anywhere to enjoy a small but interesting game. Play once, it will make you crazy definitely.

Last words – It is a nice game for time pass and without internet on Google Chrome browser on Android and Desktop also. You can play this game anytime and anywhere. 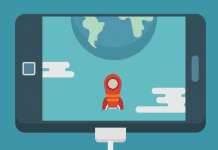 Social Games — Now and Then